FrSky is constantly looking to improve performance and reliability of RC transmission. The FrSky ACCESS protocol is the most advanced to date as it offers more features than traditional protocols.

FrSky has developed excellent new ideas that expand the role that a traditional protocol would play. Building on our well acclaimed ACCST protocol, ACCESS offers visionary features like Smart Share™, Smart Match™, and Trio Control ™. Once a receiver is bound to a radio, it can be re-bound at any time without accessing your receivers bind button. Sharing models has never been easier, and updating has also been simplified, you no longer need to physically connect your receivers for updating. In addition, new tools like a Spectrum Analyzer and Power Meter are now available on your transmitter.

Always on the cutting edge of technology, we have developed ACCESS to improve your flying experience and allow you to do more with your transmitter and receiver than ever before. 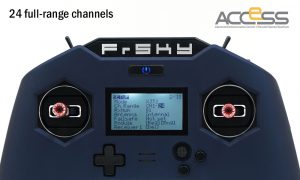 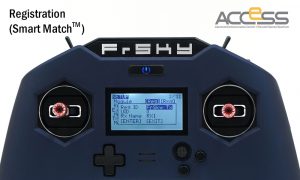 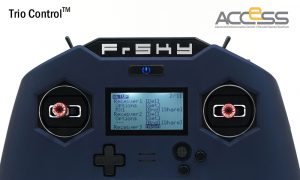 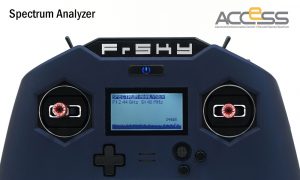 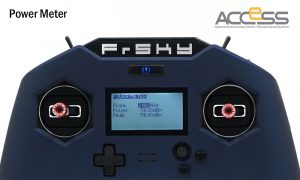 Q: What is Smart MatchTM ?
A: Now you get extra security before you fly. Smart MatchTM acquires dual certification from your receiver and your transmitter to give you double the protection.
Q: What is Smart ShareTM?
A: Now you can bind multiple transmitters to a receiver and Smart ShareTM assures that you have a unique certification for each transmitter. If you fly competitively you can set up two identical transmitters and have a spare one ready to go in the event you need it. No need to find the bind button on the receiver. It’s all ready to go. Many clubs have trainer aircraft to help new modelers. Now it is easy to allow authorized multiple transmitters to bind with the trainer aircraft receiver.
Q: What is Trio ControlTM?
A: ACCESS allows one transmitter to control the signal and/or telemetry for up to 3 receivers per model. Receiver redundancy provides an extra layer of safety when flying larger models.
Q: Can I update previous FrSky products to the ACCESS protocol firmware?
A: All previous and present FrSky transmitters can be updated to the ACCESS protocol, The X, XM, RX, GX and S series receiver support will be gradually added to the supported list. But no ETA at the moment. FrSky must consider the posibility of successful migration for older products if will be possible thanks to some HW limitations.
Q: What are the improvements of ACCESS protocol when compare to ACCST?
A: The ACCESS protocol supports up to 24 channels with increased transmission rate and lower latency (Total latency from Tx stick input to Rx channel output) and the elevated performance.
Q: Is there any differences between the old and new products when using the ACCESS protocol?
A: Yes. Some of the new functions like the Power Meter were developed and optimized with the new FrSky transmitters (e.g. Taranis X-Lite Pro). When it comes to wireless performance, the new upgraded RF module is built specifically to use the new ACCESS protocol. This will provide a superior link than if used on a standard module.
Q: What frequency band will be supported by the new ACCESS protocol?
A: The FrSky ACCESS protocol will be applied to both 900MHz and 2.4GHz working frequency band, but exits the performance differences. And FrSky will release our dual frequency products like the radios, Tx modules and receivers this year.
Q: In what scenario can I use the Smart ShareTM function?
Q: Which receivers will support the ACCESS protocol?
A:
The 1st batch of updates includes RX4R, RX6R, G-RX6, and G-RX8.
The 2nd batch will include RXSR, XM, XM Plus, RX8R Pro.
Q: Are there different versions of ACCESS receivers and transmitters for different regions?
A:
There are no different versions of ACCESS receivers, but the transmitters do have separate modes (LBT and Non-LBT modes). The ACCESS receiver will automatically recognize the working mode according to the transmitter when they are communicating. The LBT mode only works in the EU.  Users in the US and other places can choose either mode to use.
Q: Is it possible to fly my ACCST receivers with a new ACCESS transmitter?
A:
If users have an additional FrSky transmitter and some ACCST receivers which are not supported by ACCESS yet, you can retain the ACCST protocol firmware, and consider upgrading to ACCESS in the future. FrSky suggests that users upgrade their transmitters and receivers to the ACCESS protocol for new features if they are supported.
Q: Regarding the external module for the FrSky new coming radios.
A:
FrSky will mostly adopt the 8 pins module interface (Lite version) for the new coming radios. For the manufacturers of the third-party external module who follow the requirements below, FrSky will offer the necessary supports of software and hardware including the technical material, interface design and etc.
1. The third-party external modules should be verified by FrSky compatibility tests;
2. The manufacturer does not infringe on others (individual, organization and company) intellectual properties.
Using an unverified external module can cause product impairment. The unverified third-party manufacturer is responsible for any damages that may occur, and the FrSky users warranty will be invalid.
Lajkuj
Twítni
Tagy: ACCESS ACCST Frsky protocol